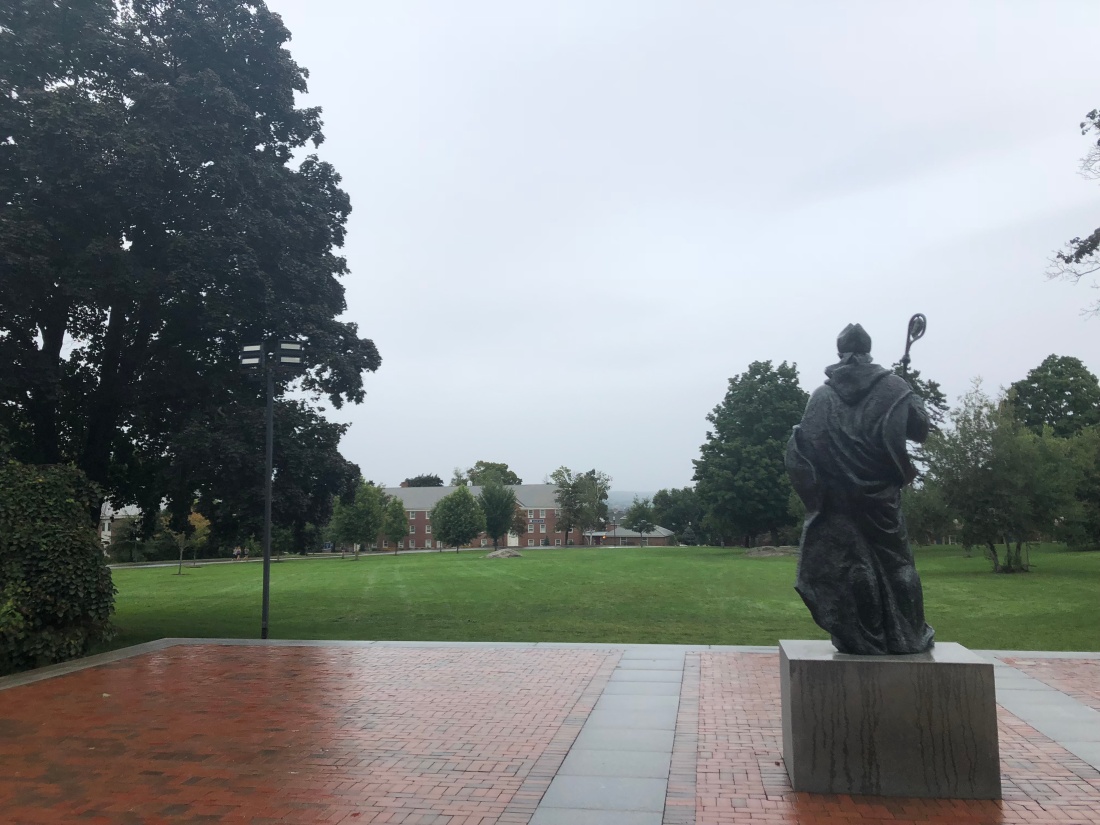 As students new and returning moved onto the hilltop for the fall semester, they were faced with the reality that their tuition dollars just don’t go as far as they used to. They slowly learned of a series of budget cuts across departments that drastically impact day-to-day life here at Saint Anselm College.

At the first residence hall meetings of the year, RAs informed their residents that laundry services on campus were now technically ‘free.’ The cost of laundry, however, is now included in the overall tuition and fees each student pays to attend Saint Anselm College. In some residence halls, RAs told their residents that because laundry is free, printing now costs the students. The decision to cut free printing seems to be the cut most directly felt by the student body.

Saint Anselm College utilizes a print anywhere system, which students can access from their personal computer or any school computer and swipe their ID card at a printer station to print documents. In the past, printing was free and students could reload allocated printing funds onto their card free of charge. As of this semester, students will be allocated fifty dollars to use for printing. Once they use up all of the allotted funds, students must use their own money to refill their printing funds. What once was commonly referred to as “monopoly money” has suddenly become much more real, without any official notice.

Students have found this problematic for many reasons. Many departments on campus require seniors to write a thesis, which can range anywhere from 25 to 40 pages, or more. In addition to printing their theses, students typically print out the sources they cite which also tend to be lengthy. Isabelle Daigle, a senior in the Politics Department said, “My thesis combined with all of my sources totals to around one thousand pages of paper if I decide to print it all.”

Seniors are not the only one who have been impacted by this change in policy. Students in the nursing department are required to print large amounts of documents for class. If they run out of printing money, these students will have to use their own money to pay for printing, which could amount to hundreds of dollars and negatively impact their learning experience.

Cassandra Bigelow ‘20, a nursing major, explained that she prints daily for her classes and regularly goes through the printing allotment. Now, she feels forced to look elsewhere. “I have been trying to find ways to avoid printing while still keeping up with my classes,” she said, indicating that avoiding printing is forcing her to reevaluate how she studies for classes and takes notes. She continued, “Some majors don’t do a lot of printing, but I know that all nursing majors are disappointed with this policy change and are having to find different ways to study effectively.”

Dennis Aveta ‘20, also expressed his disappointment in the decisions. “I already went through $20 of printing to print a required lab manual. I wasn’t happy when I found out I had to pay for printing.” He continued, “I like the fact that laundry is free, but I think the student body should have been consulted in this decision process.”

In addition to theses, lengthy nursing assignments, and lab materials, students are likely to be affected across all disciplines. Multiple professors maintain strict laptop-free classrooms and require students to print all reading material, even if it could be easily accessed on the web. Certain professors have asserted that this not only increases focus during class but that reading paper sources with a pen in hand is more beneficial for reading comprehension.

The College has not issued any formal statement about the new pay-to-print policy. When asked to elaborate on the college’s decision-making process regarding printing, Chief of Staff Neil Levesque did not return The Hilltopper’s request for comment.

Outside of the academic sphere, there are various clubs and organizations on campus that rely heavily on the old free printing system.

When asked for a comment, members of the debate team said that instead of paying for printing through the college, they would be using their own private printer in the debate office. Presumably, the club has decided that is a more cost-effective approach than using the print anywhere system. Cassy Moran ‘19, a member of the debate team, said, “As a member of debate team, I need to print a lot of materials that can be very expensive throughout the year. Last year I had to refill my card every week or so. If I were to use the public printers, it would be very difficult to balance between that and printing all of my classwork.” In addition to the debate team, the Model UN Club also typically prints large documents that they need to prepare for when they compete at Harvard Model United Nations.

Though it is clear that the printing restrictions have received overwhelmingly negative feedback, there are potential benefits, such as decreased paper use. However, the Green Team did not answer when asked about the positive environmental impact of the new policy.

The College has not addressed the changes and failed to respond to The Hilltopper’s repeated request for insight into the decision.

There have also been cuts to work-study budgets in various departments on campus, such as the Athletics Department. At a recent meeting in the Athletic Department, Neil Duval explained to student workers that although a student might be allotted $1,000 in work-study money, each department is only allowed to spend a certain amount on work-study students. So in reality, if a student has $1,000, they may only be allowed to earn half of this amount within the department. Duval emphasized that although this new regulation has been put in place, the department would do its best to ensure that all students would be able to earn their full work-study amount, even if this meant spreading students out with multiple campus jobs.

Budget cuts have impacted the library as well. The Geisel Library was previously open weekdays until 2 a.m. but is now only open until midnight during the week. Geisel librarian Martha Dickerson confirmed that these cuts to library hours of operation were due to campus-wide budget cuts. While the library and other campus facilities did send out emails containing hours of operation, there was no formal email sent explaining why hours had been cut.

Students have already felt the pressure of shorter hours. Liam O’Rourke ‘19 said, “The first time that I heard of the library’s new hours was last night at 11:45 right before the library closed. While there are other options on campus, the library is the most resourceful place to complete work. It doesn’t make sense that these hours are limited.”

O’Rourke is not the only student frustrated by the change in the library’s hours. Others, like Elise Bouchard ‘19, say they have been repeatedly kicked out of the library at closing. “While I understand that closing the library at midnight is due to budget cuts, it is a serious restraint that negatively impacts students,” she said. Bouchard went on to emphasize the negative impact the budget cuts are having on students’ ability to learn. “It is simply a decision which limits students and does not facilitate a studying environment consistent with the course load which we receive.”

Madison Mangels is a junior Politics major at Saint Anselm College. She is originally from Long Island, New York. View all posts by Madison Mangels