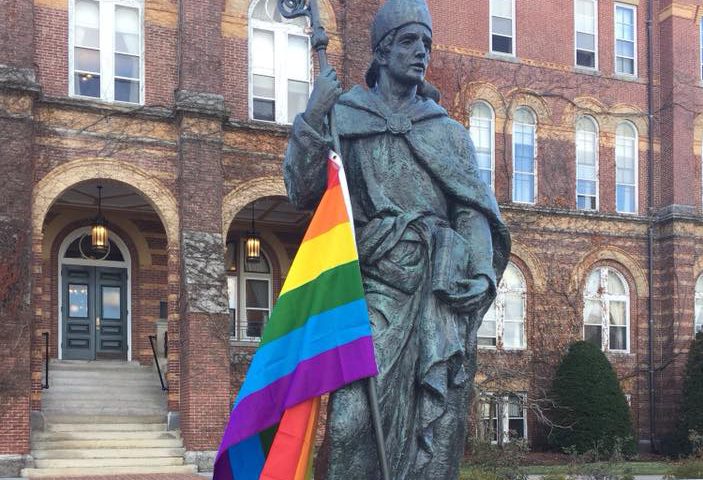 Juniors Jenna and Haley Lyons at the LGBTQ+ Day of Visibility. (Photo Courtesy of David Banach)

Homosexual, lesbian, queer, transgender, asexual, gay; these are just a few of the identities present within the Saint Anselm community. While these are identities, they are not definitions.

Last week, the Anselmian community took time for education surrounding the LGBTQ+ community. One event was a panel where five Saint Anselm students discussed their experiences of being identifying, which was followed by 75 minutes of questioning from the audience.

The panel was put on by the True Equality and Dignity Alliance (TEDA) and strived to abolish ignorance and facilitate healthy conversation. Within this panel, many misconceptions, stereotypes, and homophobic ideas where discussed and challenged. When asked about their experiences on this campus, many answers pointed to similar problems faced by identifying students.

While not specific to the Saint Anselm campus, there is a culture that can enable ignorance within students and the community as a whole. Some people on the panel pointed to words students use that have the ability to make a person feel small. The problem often goes overlooked, and that is why identifying students made an effort to convey the damage poorly-chosen words can do.

Some in the Saint Anselm community throw around terms that are derogatory and offensive without any thought for how they might affect a person who they are communicating with, or even just someone who overhears a conversation. Many students agreed that they have been hurt by words that fellow students and other members of the community have said, and they called on all students to do their best to change the culture.

An eye-opening discussion centered around allying with the LGBTQ+ community. Various speakers on the panel conveyed the importance of allies in speaking up when they feel uncomfortable with the words someone is using. They explained it is the responsibility of a good ally to step in and have an educational discussion surrounding the language used and the severe effects that it has.

An ally is not just someone who is an outsider that supports identifiers, but an ally can also be someone within the community; lesbian identifiers supporting asexual identifiers, for example, or transgender persons supporting gay identifiers. The feeling of support, as discussed in the panel, is important. It is important for the community to feel accepted, but those on the panel stressed the importance of avoiding a “savior complex.” Allies should remember that their role is to support, not to save.

This is why events such as Visibility Day, which took place on Thursday, April 26, are so important. Matt Soloman ’20 came up with the idea of Visibility Day on the Alumni Quad as a way to show identifiers and those who may not be comfortable coming out in the community that there are members of the Saint Anselm community that are there as a support.

When asked about why this day was important to Matt, he replied, “LGBTQ+ Visibility Day was an effort on my part to showcase the support for the community on campus… Unfortunately, we usually only hear about those on campus who wish to de-legitimize our existence, because they are given platforms to do so.” He continued, “This event was an attempt to give all allies an extremely visible platform (right in front of Alumni) to show their support and let the community know they have an important place on the Hilltop.”

Sharing his own story, Matt continued by acknowledging the difficulties that he personally faced prior to coming out. “There are a lot of temptations to stay hidden and not accept who you are” he revealed. “I personally was in the closet for seven years until I finally decided to come out. Being stuck in a place like that is incredibly debilitating to mental health and is a degrading thing for any human to feel.” He used his experience to be of support to others who have gone, are going, or will go through a similar experience. The community support, like the support displayed at Visibility Day, is essential and is something that the Saint Anselm College community must come together around.

Matt called on the school and community to continue on this path and go even further, “It is the school’s responsibility to provide a safe environment for all Anselmians. While my event showcased great progress, there is still much more work to be done.”

View all posts by Kait Brine