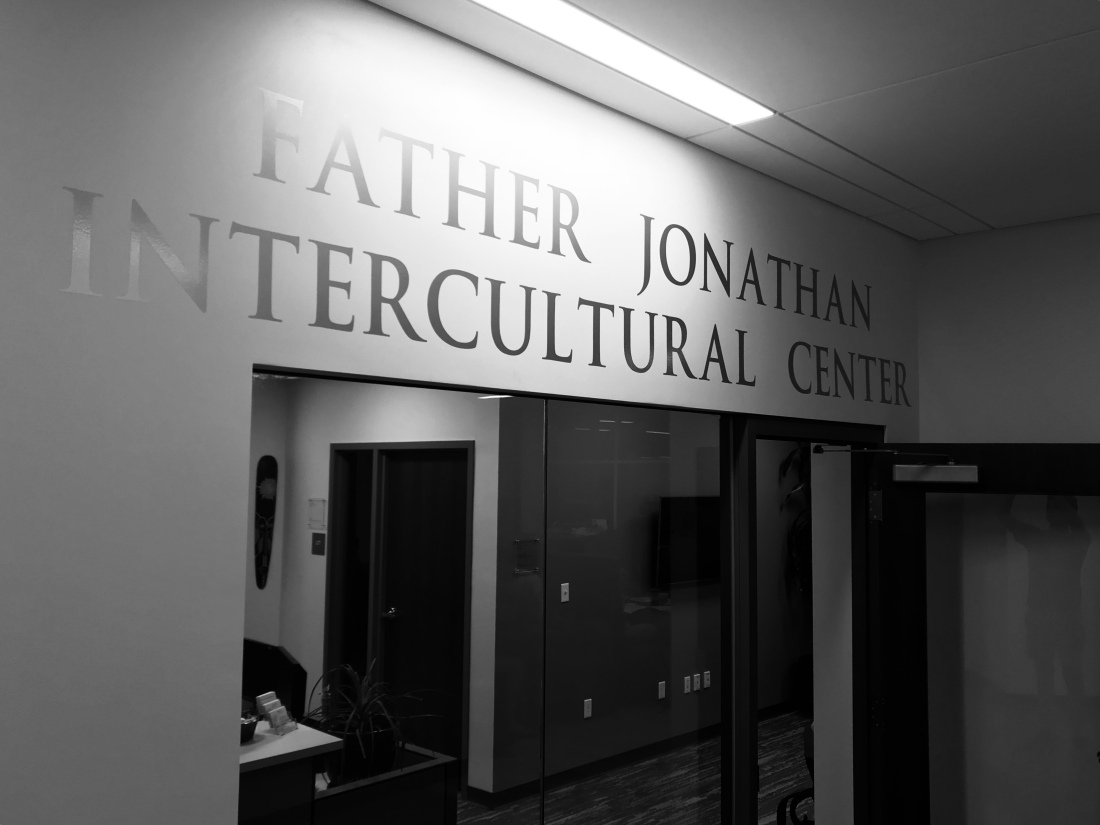 The inauguration of the Roger and Francine Jean Student Center Complex has come with a slew of renamings of campus offices to reflect the valued contributions of the many benefactors who made the new Complex possible. The most substantial renaming is that of the office previously known as the Multicultural Center.

As students began flocking to the building, some noticed that the office they affectionately knew as “Multi” was branded with a new name: the “Fr. Jonathan Center.” The full name of the center is the The Father Jonathan, O.S.B., Center for Intercultural Learning and Inclusion.

In an email to the school community, Chief Diversity Officer Dr. Ande Diaz explained the name change, “In 2013, donors honored Father Jonathan DeFelice O.S.B., ’69, whose groundbreaking work for diversity and inclusion as president of the college laid the foundation for the continued work of the center.” She continued, “We are blessed to have Father Jonathan’s continued support for our commitment to serving diverse students; and while the Center’s mission remains unchanged, the new name reflects a 21st century approach.” Her email also explained that the name of the new Intercultural Center was being shortened on some signage to the “Fr. Jonathan Center.”

As Dr. Diaz mentioned in her email, the full name of the former Multicultural Center has included Fr. Jonathan’s name since 2013. Previous signage and on-campus references to the Center did not refer to it as the “Fr. Jonathan Center,” however.

The new abbreviated name reflects the work of the former president of the college, Jonathan DeFelice O.S.B. ‘69. When he served as president, Fr. Jonathan helped to spearhead efforts for diversity and inclusion on campus.

In a written statement to The Hilltopper, Fr. Jonathan explained the importance of the Intercultural Center, saying, “The Center for Intercultural Learning and Inclusion is the result of a great deal of thinking and planning on how to best implement the call of Catholic Social teaching concerning reaching out to all.” He called the center a “tangible way of exercising Benedictine hospitality.”

Sheila Ramirez ‘18, who frequents the Fr. Jonathan Center, explained that Director of the Fr. Jonathan Center Wayne Currie and Dr. Diaz informed her of the name change, citing recent donations made to the center. “The donors chose to give towards the multicultural center to honor the legacy of Father Jonathan who was a beloved president of the college and the founder of the multicultural center,” Ramirez explained. She went on, “At the end of the day, Saint Anselm College is a business and the renaming of the center is up to those who have the most money.”

Ramirez’s experience, however, was atypical. Gabriel Lopez ‘20 said, “Initially, we weren’t told anything about the name change until we saw the plaques on the walls and questioned it ourselves.” According to Lopez, Director Currie explained the name change to the students who are involved in the Fr. Jonathan Center after they discovered the change.

While understanding the realities of the renaming process, Ramirez voiced concerns about the new name, specifically the decision to abbreviate the name to the Fr. Jonathan Center as opposed to the Intercultural Center. “I believe advertising the multicultural center as the Father Jonathan center does not correlate with the mission of the multicultural center.” Citing the center’s emphasis on inclusivity, Ramirez does not believe that the abbreviated name should reflect one individual.

She was quick to point out that Fr. Jonathan’s legacy should be honored by the center, however, and she seemed appreciative of Fr. Jonathan’s work on behalf of inclusivity and diversity. “Should we honor the legacy of Father Jonathan? Of course. A sign that speaks in depth to the legacy of Father Jonathan should be displayed in the center, but the first part of the name of the center should not be a person’s name,” she said. “The mission of the center is inclusivity and welcoming while having the name of the center be after a person who is an ally takes away from our mission and is separatist.”

Lopez said he, too, understands the contributions Fr. Jonathan made to the center, but he is not enthusiastic about the decision to abbreviate the center’s name to the “Fr. Jonathan Center.”

He explained, “I didn’t agree with the change to ‘Fr. Jonathan Center,’ though I know of his importance, involvement, and how he is the reason we exist and have the opportunity to promote diversity, his name on the forefront takes away from who we are and only added confusion to people [who are] part of the center or not.”

Lopez said he is, however, supportive of the decision to refer to the center as the “intercultural” center instead of the “multicultural” center. Dr. Diaz explained the change in her email, saying, “The term ‘multicultural’ means ‘many cultures’ and was popularized in the 1990s; ‘intercultural’ symbolizes that today, these many cultures are now interacting and engaging across cultural differences.”

Ramirez and Lopez did not believe that students were consulted at any point in the renaming process. The decision seems to have been made for them. However, their voices have been heard. On Thursday, May 3, when additional signage was installed in the Jean Complex, the abbreviated sign for the Intercultural Center was changed from the “Fr. Jonathan Center” to the “Intercultural Center.”

When asked to comment on the process, Director Currie declined to speak with The Hilltopper about the issue. So, too, did Dr. Diaz. In her declination to comment, Dr. Diaz cited the fact The Hilltopper is an independent newspaper not recognized by the College. She made clear, however, she was happy to have a conversation about the process with interested students.

Nick Fulchino is the Editor-in-Chief of The Hilltopper and a senior at Saint Anselm College. He is from Pomfret, Connecticut. View all posts by Nick Fulchino